The other day, I had the rare opportunity to interview myself over a sushi lunch in the slums of downtown McLean, Virginia.

MC:  So, take us back to the beginning.

MC:  Born in Atlanta on January 6, 1966.  I’m the middle of three boys, with all the middle child hang ups.  The family moved to Northern Virginia in 1968, and with the exception of the college years, have been there ever since.  Since 1991, I’ve been playing bass, guitar, harp, and singing and writing songs for the folk-rock quartet, Eddie from Ohio.  We’ve played all but 13 states in the U.S., and have even dipped our toes in Canada & Mexico.  We’ve made nine CDs and a gazillion t-shirts.  I also have an amazing 11 year old son, as well as a reliable Honda in need of a new left rear tail light.  Are we done?

MC:  Just a few more questions…. convenient that your CD is released on your birthday.  Your fortieth to be exact.

MC:  Are you expecting any presents?

MC:  Heavens no, certainly not.  But for anyone interested, I’m registered at Best Buy and Borders.

MC:  No, I just wear glasses for night driving.  Say, you’ve got some seaweed in your teeth… like right here.

MC: Nnnnnnnnnn.  Did that get it?

MC:  No, but let’s have your next question, I’m running late for my spin class.

MC:  Well, you might say as the son of a Wedding Photographer and a Southpaw, it’s pretty much in my blood.

MC:  With releasing your first CD at the age of 40, would you say it’s kind of a mid-life crisis thing?

MC:  I believe the word is therapeutic.

MC:  Get outta here!!!  Are you serious?  I’ve been saying therapeutical for years.  There’s no such word as therapeutical?

MC:  Maybe no one’s had the heart to tell you.  You do have a very commanding presence, if not intimidatic.

MC:  I believe the word is intimidating.

MC:  Touche. Do you suffer from sagaphobia?

MC:  I’m doing okay.  The other day I was carded when purchasing a carton of cigarettes.

MC:  I didn’t know you smoked.

MC:  I don’t.  I just wanted to see if I’d get carded. Wanna buy a carton of smokes?

MC:  Maybe.  Depends on the brand.  As long as there’s a cartoon character on the packaging to appeal to my inner youth.

MC:  Why did you buy a whole carton as opposed to a pack?

MC:  There was a special, and it’s actually cheaper per pack when you buy a carton.

MC:  I know.  Think about how much more money I’ll save!

MC:  Speaking of tobacco, were you bitter about Virginia not selecting your tune “Old Dominion” as the state song?

MC:  No, not at all.  But when I pay my year end state taxes, I send the check back to Georgia. (chuckles)

MC:  (wipes tear away) Phew.  That’s good stuff.  What I’m going to do now is throw out a couple of names, and you say the first thing that comes into your head.

MC:  That’s my response.  I was contemplating what the W stood for.

MC:  Do you need more?  Would you like some of mine?

MC:  No, I’m still thinking about the W thing.  Next name.

MC:  A percussive genius and a prince of a guy.  Everybody loves Eddie.

MC:  A voice from Heaven.  Lungs from Hell.  Everybody loves Julie.

MC: Hmmmmmmmm.  Was he that kid who played Cousin Oliver in the last 6 episodes of the Brady Bunch?

MC:  I believe that was Robbie Rist.

MC: He was like a larger version of Robbie Rist.

MC: Hmmmmmmm.  Wasn’t he that guy who played sitar with George Harrison?

MC:  I believe that was Ravi Shankar.

MC:  I once photographed his star on the Hollywood Walk of Fame.

MC:  See for yourself… 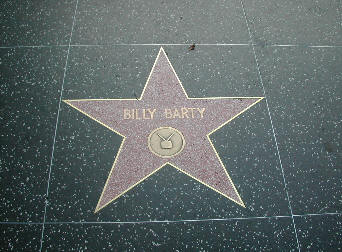 MC:  Do you have it out for Reagan?

MC:  Not at all.  I believe they should name more stuff after him.

MC:  Sounds like a perfectly good name to me.

MC:  They’re probably fearful that the last Washingtonian named Reagan spun her head around and spit up pea soup.

MC:  Are you cross-referencing The Exorcist?

MC:  Never seen it.  I was referring to a gal who used to be in my father’s carpool.  The station wagon really started to stink.

MC: Hmmmmmmm.  Are you sure it isn’t Reagan Schaefer.

MC:  Maybe we should move on.  Tell me your favorite Beatles song.

MC:  “And Your Bird Can Sing” if only for that precious moment at one minute and twenty seconds…

MC:  Yeah, but a helluva lot better than that.

RS:  I just saw you talking to yourself over here and thought I’d join you.

MC:  That would be awesome!

MC:  Well, uh, we’re kinda in the middle of an interview.

RS:  Oh, sorry. Well, see ya around. Have a good interview. (exits with swimsuit model on each arm)

MC:  Thanks for lunch.  I appreciate you guys picking up the meal.

MC:  Wait a minute – the person at MC Magazine told me you guys would take care of the sushi.

MC:  Sheeze.  Well, when does this piece run?

MC:  It should be online by the close of business.

MC:  You mean, this is an Internet-only deal?!

MC:  Give me a few hours to upload.